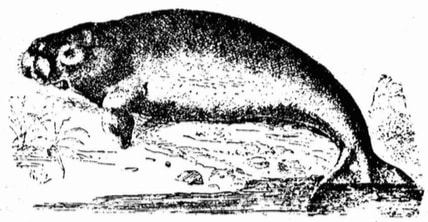 On May 15, 2008, we left Santa Cruz for the next step in our journey along the paths of our ancestors. As usual, our friends and neighbors helped us get started; this time Gary and Ida drove us to Oakland where we would board the Amtrak train to Emeryville the next day.
Having never been to this part of Oakland before, we were a bit apprehensive about our overnight stay. But Jack London Square turned out to be delightful. We enjoyed a delicious salad and glass of wine at Il Pescatore Ristorante, stopped at the train station and got our tickets, and cruised the markets in China Town. We retired to our room at the Inn at Jack London Square, a popular place with the locals, including several night herons who roosted in the trees and hung out around the swimming pool, their bright red eyes watching for a meal that never came.

At 6:30 the next morning we walked the five blocks to the train station, where we boarded a commuter train for the ten-minute ride to Emeryville. This wasn't the Amtrak train we were looking forward to but we were excited nonetheless. We were "All Aboard" and the train was moving out!

We made our way to the Dining Car, learning to hold on to the edge of the window frame as we rock-and-rolled our way across Central California. Later, we learned to "Walk Like a Duck," the official Amtrak approved way to keep our balance when moving from car to car. Lunch was a Caesar salad with fruit from our Continental breakfast and a glass of Chardonnay. The Dining Car is strictly "Community Seating," giving us a chance to meet and leisurely talk with a new couple at each meal. Our first such encounter was with Rhonda and Leonard, a couple who had met each other on the Internet in 2000. In the days to follow we would visit with Vilma & Joe from upstate New York, married 59 years (he retired from life long work with Gould's Pumps), Li O & Bambi, a young couple originally from China, moving from Cupertino, CA to Boston, and Steve & Kathleen (he retired from being a hose salesman all his life and knew of the Hose Shop in Santa Cruz!).

In Sacramento, the train was joined by a group on their way to Reno for an anniversary celebration of something railroadish. They entertained us on the intercom across the Sierra with interesting bits of information about the history of the railroad and the places we passed through as we made our way up and over the summit. We learned that there are 47 tunnels between Denver and Thistle, UT. There are 30 tunnels before the 6-mile-long Moffatt Tunnel.

At Roseville, we saw our first railfans, who go to railroad crossings and stations and photograph the trains as they come through. We would see many of them along the way over the next two weeks. And no matter where we were, in urban neighborhoods, rural towns or in agricultural fields, people would stop whatever they were doing and turn and wave at the train as we rolled by. The mystery and promise of train travel still excites the imagination across America.

Just before Emigrant Pass we saw our first Bald Eagle (Haliaeetus leucocephalus), white head glistening in the sunshine. We slowly passed fir, pine, cedar, spruce and dogwood in bloom. We traveled along the Colorado River for 240 miles, through steep canyons of gnarled metamorphic rocks, worn by the relentless press of running water. For some reason, most of the river rats plying their banana boats on the Colorado River felt compelled to moon the train rather than wave, much to the amusement of the paying passengers who preferred to wave and smile.
In Denver, we had planned to meet Jean's cousin at the train station, but we were 45 minutes late and visitors were not allowed to come out on the train platform, the only place on the trip where we found this restriction. The train was late due to encounters with freight trains in the mountains. Passenger trains have to wait on a siding as the fast freight thunders by on the main line. This seems to be a common occurrence, since Amtrak doesn't own it's own tracks, having to lease them from the freight companies who give their own trains priority. Perhaps this will change some day as passenger travel increases in popularity.
Back on board, into our comfy room and ready for the first of many games of gin rummy! We had brought books to read but the motion of the train made that uncomfortable, except for briefly at night, as we lay in our bunk beds before lights out. Besides, there was so much to see and many opportunities for roaming through the train that books weren't necessary. We also were treated to a copy of the New York Times, slipped under our door, waiting for us every morning. Ahhh, the train. So civilized a way to travel.
We were 2 hours late into Chicago but since we had a long layover there before catching the Lake Shore Limited, we had no worries. In fact, on a train there is little to worry about.

We checked into the posh lounge that Amtrak provides for those passengers who have sleeping accommodations on their trains. There we were able to have our baggage locked, check our emails online, and snack on snacks provided for passengers. We eschewed the snacks and instead we asked an Amtrak employee to recommend a good restaurant nearby, as we were ready for a long walk. We exited the train station in downtown Chicago, footloose and fancy free, and walked a block to Jackson Street, then 3 more blocks, crossing the Chicago River, then right on South Halsted Street, where we had the choice of half a dozen Greek restaurants. We chose Rodity's and we chose well! Vegetarian mousaka, spinach and rice. Burp.

At dinner we toasted ourselves, in celebration of our seventh wedding anniversary (May 19th).

A fast-paced walk to the train station and then, on time, we boarded the Lake Shore Limited (room #1 in car 4812) at 8:30 pm. We were all treated to a wine and cheese welcome in the dining car, before the train departed at 10:00 pm with us settled in our bunk beds for a good night's sleep as we traveled east. 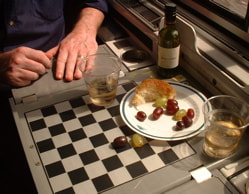 We saved some grapes and cheese for the next day. Can travel get any more luxurious?!